This article about the FCHgo pilot classroom activities brings us to Poland.
Janek, primary school pupil in Ośniszczewko, tells us what he learned about the “Volta battery” during one of the FCHgo lessons held at his school.

I  live  in a small village (Ośniszczewko), just in the middle of Poland. With our teacher, Ms Kasia, we started to discover the story about hydrogen from studying “batteries”. Ms Kasia said that we should call it “Volta battery”. We knew that batteries are used everywhere, but we never asked ourselves, how they worked.

In our lesson (06/11/2019) we explored batteries with our “hands on”. The use of a “Volt-meter” is not difficult. It is written “V” on this, and Ms Kasia helped us to switch it on and insert cables. The rest we did ourselves. 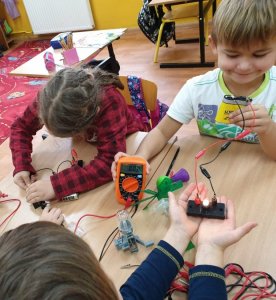 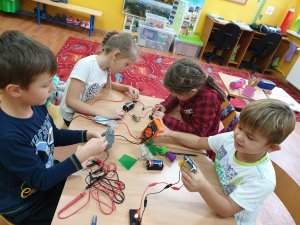 Ms Kasia told us, that the small, flat battery that I used is a triple battery – three smaller put together like in a pile!

She said that these batteries will not contain the heavy (and poisonous, she said) metal called lead but a very light (and invisible) gas called hydrogen. We like hydrogen.

We trust her. She is our Ms Kasia!

You would like to try out yourself the experiment Janek and his classmates conducted? Check out this guide for experiments, exploring volta’s batteries: English, Italian, Danish, Polish