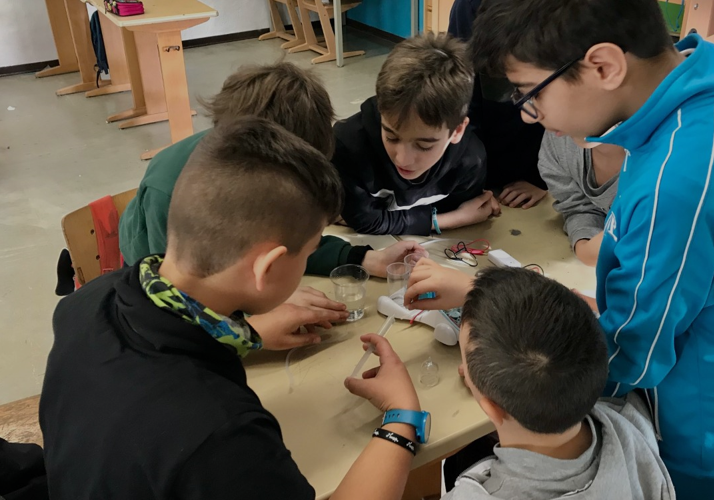 Italian teacher Irene D’Agostino from primary school Don Bosco in Bozen-Bolzano shares in this article how the FCHgo lessons went in her class. Find out from her personal report on the lessons, what activities the pupils were particularly excited about and why confetti played a significant role.

My name is Irene D’Agostino and I have been teaching at primary school Don Bosco since 2007.  Primary school Don Bosco belongs to Istituto Comprensivo Bolzano 2. In the past few years Don Bosco and A. Langer primary schools have invested time and resources in order to strengthen the mathematical and scientific field with project like “Experiscuola” and the partnership with The Free University of Bozen-Bolzano.

I have decided to take part in the project “FCHgo!” with my class in collaboration with professor Federico Corni in order to improve the pupils’ creative and planning abilities.

In the end, the results exceed my expectations: All pupils have been actively involved in the workshops through cooperative learning.

During the first meeting, the pupils read the “Apple Story”, displayed on the interactive whiteboard . Prof. Corni helped them with the analysis of the verbal and non-verbal language while they were watching the story’s beautiful images.

The ‘Apple Story’ poster made by the pupils

I was amazed to see how many things they already knew and I was surprised to discover their curiosity.

They were also excited about the toys suggested for an in-depth analysis by pupils . The pupils were divided into four groups, the first analysed the dynamo torch, then the second group a windmill, the third and the fourth groups the hydrogen car. They made a very accurate rendition of the toys’ structure with precise drawings of parts, along descriptions of their functioning. 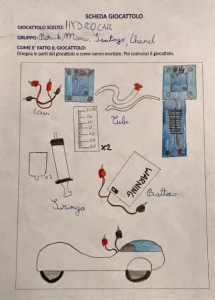 It was a pleasure to see how the children cooperated, working for a common aim. Some of them were drawing or colouring, others were giving instructions to their schoolmates, no one was left outside.

Before the second meeting, we scanned the works and made a presentation, so they could have a look at each other’s work. The pupils always asked me: “Teacher, will the Professor come today? Or “ Teacher, can we do science? They looked forward to carrying on with the activities.

The second meeting was successful as the first one. They were proud to show a University professor their works, moreover they were excited to disclose what they have learnt and found out.

The FCHgo developed card game gave us the opportunity to introduce, in a playful way, the concept of energy carrier and couplers.

Then, on a rainy Thursday afternoon, I showed the pupils the video included in the FCHgo toolkit, which is called “Perpetuum mobile” [watch the video here]. Afterwards, the pupils eagerly engaged in portraying the ghosts, which symbolized energy carriers, e.g. rotation, in the video. 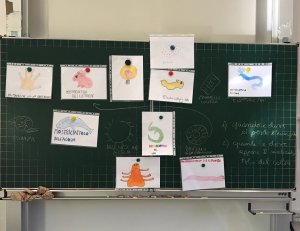 The energy ghosts drawn by the pupils

We laminated the drawings of the ghosts in order to show them during the third meeting with the Professor. The next step for the children was to act out the story to understand better the process diagram.

In small groups, the pupils drew the storyboard of their energy roleplay and one of them decided to be the director. What a genius idea to use confetti to represent energy! The confetti beautifully illustrated how the faster energy is transferred aka the faster and through the more hands the confetti is passed, the more energy/confetti is lost .

The last meeting with the Professor Corni happened on the 4th March, the last day of school before the lockdown due to Corona. The class watched the videos they produced about their energy roleplays on the Interactive Whiteboard and we analysed together energy process diagrams of the three toys analysed in class – the dynamo torch, the hydrogen car and the windmill.

Everything now was ready for making the video about the HydrogenCar, but then the lockdown came. During the video-lesson we were discussing the cons and especially the pros of hydrogen as fuel, its by-products not having any known side effects.

According to a piece of news of the 6th February 2020 public institutions and private customers have decided to endure the sustainable mobility by buying 10 hydrogen cars with the Eupoean project LIFEalps with the partnership of SASA and IIT. During the last few years, South Tyrol as a region for a sustainable mobility has promoted projects on the use of hydrogen as fuel.

In conclusion, I want to express my gratitude for those who had made FCHgo possibile: In this way we are able to encourage pupils’ creativity, curiosity, own thinking and their ability to put into practice what they have learnt. 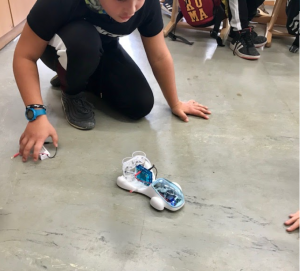 And it drives! A pupil of Mrs. D’Agostino’s class testing the hydrogen car